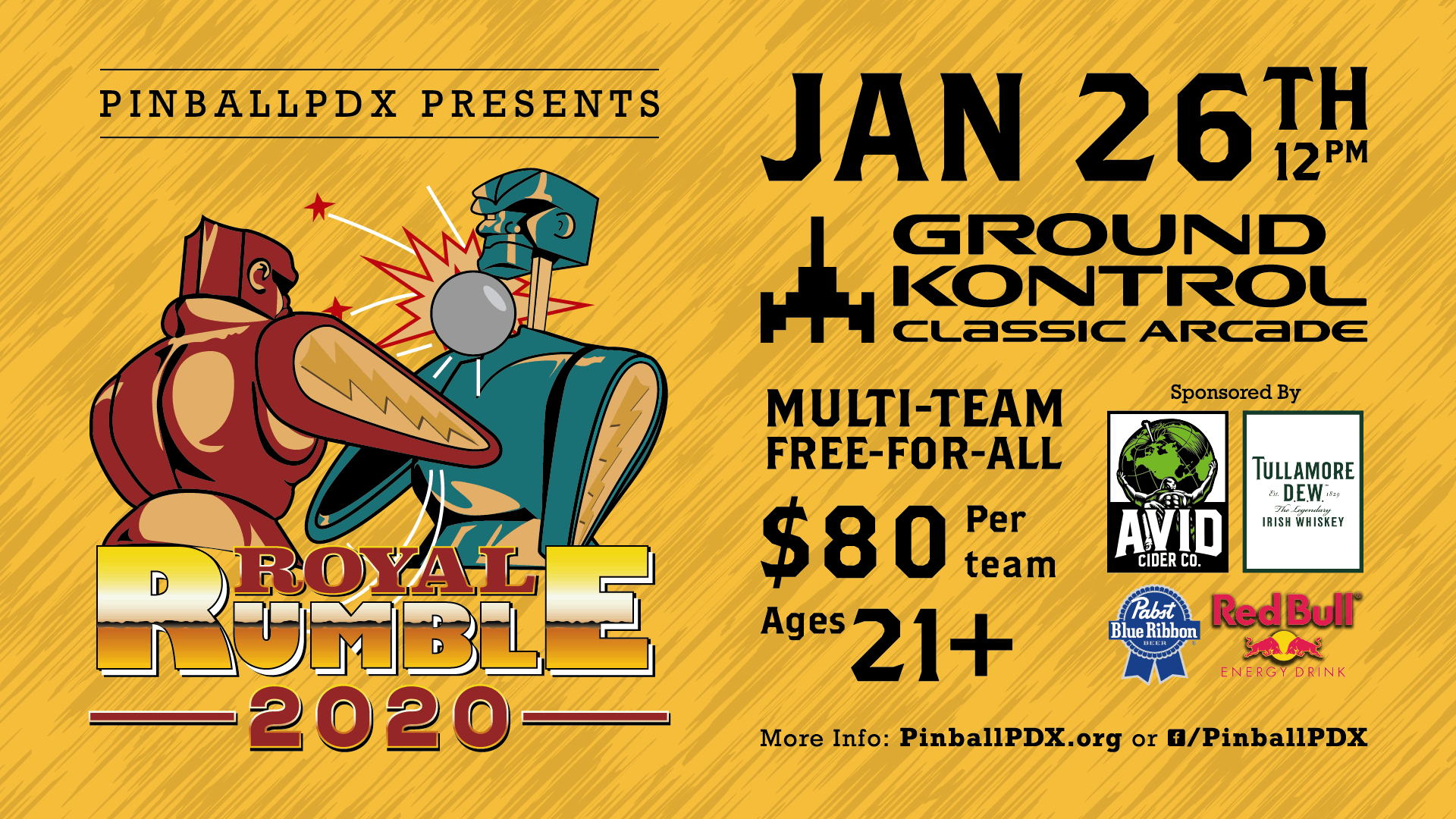 (Register by sending $80 via PayPal to contact@pinballpdx.org, include full names of all players on your team along with a team name!)

The PinballPDX Royal Rumble returns for it’s second year! On January 26th teams consisting of eight players each will battle it out for over $3,000 worth of cash prizes! This tournament will feature eight total rounds of games, the first four rounds will consist of qualifying for the second half, where the top teams will continue on in the final four rounds to play for cash prizes and swag from our sponsors!

– Tournament is open to everyone, you do not need to be a player on an active PinballPDX team to play!
– $80 buy in per team, 21+ only
– Check in starts at 10:30 AM for teams with no players who have played in a PinballPDX match, 11 AM for teams with players who have. Teams must be fully checked in by 11:45.
– Tournament begins at 12 PM
– Maximum of 16 teams, so sign up as soon as you can!
– Teams need exactly eight players to play, teams can change rosters up until the start of the first match
– We will be using Monday Night Pinball’s IPR ranking system to keep competitive balance between teams. The total IPR ranking of a team is capped at 28. More information about this is below (and feel free to ask if you have any questions!)

—Format and team restrictions are described below, IT IS SUBJECT TO CHANGE DEPENDING ON THE NUMBER OF TEAMS—

There are a total of eight rounds, the first four rounds will be qualifying rounds for the second half of the tournament. All players on each team will be playing in a given round. There are two types of rounds that will be used – doubles rounds (two players on one team versus two players on another team on a four player game) and singles rounds (one player on one team against one player from another team on a two player game). The first and last rounds of both the qualifying rounds and finals rounds will be doubles rounds, the second and third rounds in each are singles rounds. Each team will play four doubles games per doubles round and eight singles games per singles round.

In a given round, one team will be playing against players from two teams. The teams will be assigned using Swiss pairing, so teams will draw teams that are performing at roughly the same level throughout the tournament. At the beginning of the round, each team will receive a sheet with a pre-determined set of games with spaces to write the names of players down. Each team will choose four players to play the games listed on the sheet. These players will not know who their opponents are until all of the sheets have been turned in. Once all sheets have been filled out, the same set of sheets will be sent out to the opponents of the teams who wrote their lineups first. Teams will assign the remaining four players to the pre-determined machines. Teams will not know what machines have been drawn in the second half of the lineup declaration portion of the round until they receive the second sheet, but they will know who their opponents on the other team are.

For capacity reasons, games in doubles rounds will be staggered to accommodate the space available for players. Roughly half of the doubles games will start at the beginning of the round, and games in the queue will start when games in the area of the machine have been completed.

TEAM RESTRICTIONS: This tournament will use the Monday Night Pinball IPR ratings to determine the cap on restricted players per team. Each player, based on their IFPA/matchplay.events rankings, will be assigned a number one through six. The total of the team’s IPR ratings are not allowed to exceed the total team cap. A full list of current IPR rankings will be released to PinballPDX team captains for PinballPDX players. For all players who are not active on a PinballPDX team, you can look up player ratings here: http://pinballstats.info/search/

Please reach out to us if you have any questions about this!